Hi guys, It’s Nicey! My second Common Test is over, and I have a one week holiday before the final school term begins (I live in Singapore, and that’s in Southeast Asia). So basically, some Popupdates:

1. New Advertisements: Applebees and Cloudy with a Chance of Meatballs 2

I wasn’t able to find Applebees yet. I recently started to use Poptropica on internet explorer because the Adobe Flash on my Google Chrome couldn’t establish a connection with Poptropica 😦 Oh well. At least I still can play it with the internet explorer.

Anyway, the Cloudy with a Chance of Meatballs 2 Ad involves passing through a breakfast bog and not falling into the honey. For the first time, you don’t have to “restart” when you fall into honey, and simply have to click on the “Click” button that appears after you fall off the food. After passing the giant burrito-sandwich thing that opens and closes, you will get the prize. For guys, it’s the Flint Costume and girls get the Sam Costume. Both genders get the piece of cake costume, which is pretty cool. 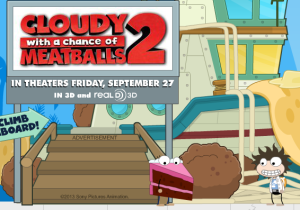 It’s a piece of cake!

Got something to look for?